Hull is top of the list in that no other city has so many opening bridges over such a short distance of navigable river.  There are thirteen bridges and all of them swing or lift to open to river traffic. All the bridges – road, rail or foot – allow not just small pleasure craft, but commercial vessels with hundreds of tonnes of cargo.

Lots of people have heard of Open Bridges and commented that they didn’t realise there were so many bridges over the river and what the names of them are and which is which. There are a couple of ways of counting them – we’ve gone with the way the vessel skippers use, so: Ennerdale and Stoneferry count as two each because they can operate independently and Scott Street bridge doesn’t count because it’s been decommissioned.

So, the bridges of Hull, from North to South:

Here’s Rich’s gallery of photographs, one for each bridge, in order, north to south. Click on an image to see the full picture & caption and scroll along… 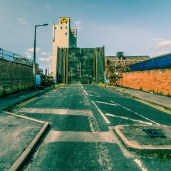 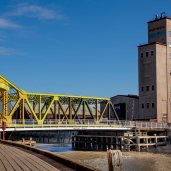 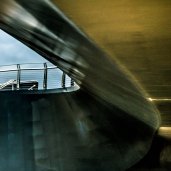 Scale Lane underneath from the deck of the Syntan

Thanks to Humber Keel Comrade’s Sailing Master John Medland for the bridge information. Click on the link to read John’s story – The Bridges of Hull – A Love Story

The image below was typed and water-coloured in 1965. It details the factories, wharfs and companies working the river at that time and the distances in minutes and seconds the vessels take from bridge to bridge. It still is pinned to the notice board at Wilmington.

Open Bridges is a whole tapestry of threads. It’s a celebration of Hull’s lifeblood, the River Hull, 13 movable bridges, the vessels that use the river and the heritage & culture that have grown up in both East and West Hull.