One of our first blisteringly hot Sunday walks to explore the River Hull took us to a beautiful stretch of the River, near Rotsea to Emmotland on the west bank of the River Hull. The water was high and cool despite the hot summer sun and two sleek Brigham Scows raced past.

It was here we first met David Hamilton of Brigham Sailing Club sailing on the River. David owns and has restored the beautiful 75 year old Brigham Sharpie, Amaryllis. Later in the year we had two engaging afternoons chatting with David over lunch in The Trout Inn alongside the River  – West Beck – at Wansford, learning about the fascinating history of leisure time on the River Hull.

Below: The Brigham Scows on our walk along the river at West Beck End, Emmotland, taken from the new footbridge.  “The blue sail is MAGIC built by Howard Goodrick in the early 1970s and restored a few years ago. The white sail is JARIC built in early 1980s.” 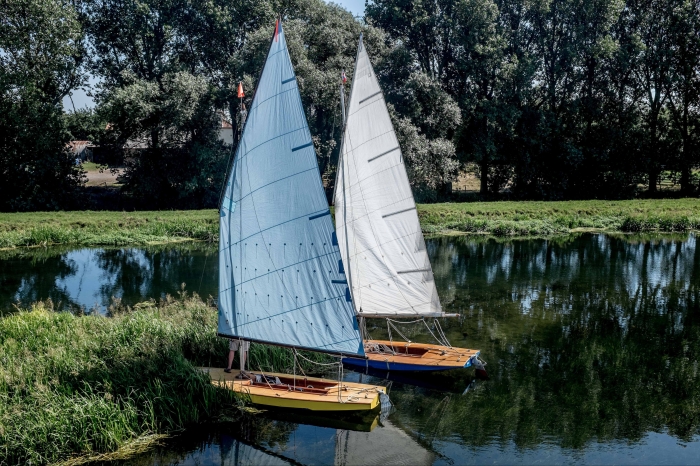 And taken at the same junction, West Beck End some 80 years earlier.

Thank you to David of the Brigham Sailing Club for his story,  history and archive photographs. Click an image in the gallery and scroll though to see the full pictures and read his story below: 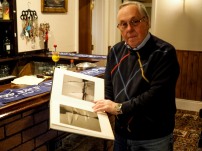 Thanks to David Hamilton for his memories, photos and archives

Up The River by Walter Silverwood. Photos courtesy of and copyright Brigham Sailing Club 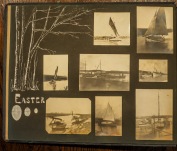 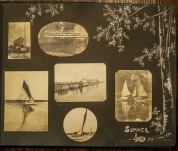 “A few years ago, three or four men who sailed boats in the Upper Hull started a small club at Brigham for the purpose of arranging races at the weekend. The project has grown considerably and there were at Brigham during the summer of 1933 a fleet of 13 boats, 3 sharpies, 4 open boats, 2 International 14s and 4 canoe-yawls.”

Sailing was a popular pastime for middle and upper classes in the late Victorian and Edwardian period. The River Hull provided good sailing in an attractive landscape. Brigham was a popular mooring place. Local artist Fred Elwell R.A. regularly sailed up to Wansford and painted his houseboat “Spowder” moored near Brigham in 1908. Photographs published in the Humber Yawl Club (HYC) year book for 1898 show that their members were sailing up the River Hull to Brigham again in sailing houseboats. One HYC member was Thomas Holtby, a member of a well known East Riding family and half-cousin of the writer Winifred Holtby, who went on to become a founding father of BSC. As a child he lived at Corps Landing near Brigham but later lived in Driffield. It is possible he was also a member of Driffield Sailing Club but no records of this club are known to survive.

Brigham Sailing Club (BSC) was founded in 1928 by an amalgamation of members of the Driffield and Hull Bridge sailing clubs. Apparently, these clubs had, prior to that year, an annual get-together and race at a convenient half way meeting point (Brigham), and subsequently decided to form on club there. It is not clear whether either of the two clubs carried on at their previous venues, or whether it was a complete merger, but the fact that one of our trophies is inscribed D.S.C. would suggest the latter. Thomas Holtby became BSC’s first Commodore, an office he held until his death in 1947. His efforts in seeing the club through the immediate post-war period were invaluable.

The location for the new club at Brigham was convenient, having a good stretch of water from Brigham Bridge to Hempholme Bridge, unfettered by locks or tides and ideal for racing. A narrower tributary up to Frodingham was and still is also used for cruising. Using Hempholme Lock, it was possible, (with difficulty) to sail right down the River Hull and out into the open sea. One senior member recalls, as a boy in the late 1940’s, the annual cruise and picnic down through Hempholme Lock, when, with reasonable wind and water conditions, boats could get most of the way to Beverley. Sadly as the canal fell into disrepair when commercial traffic ceased, this event ended around 1950.

The “Brigham Scow” evolved over a number of years. The HYC yearbook for 1902 has line drawings of the “Hornsea Mere One Design’ which is almost identical to our current design and based on a LARK scow designed at the end of the 19th century. There were seven of these boats sailing on Hornsea Mere in 1905 but their numbers declined rapidly and none are listed in the HYC membership lists of 1912. A photograph postcard dated c.1910 shows a Scow shaped boat at Wansford Lock, a couple of miles upstream from Brigham. Did one or more of the Hornsea boats move to Driffield? What seems difficult to understand is that it took so long before this design was accepted as the most efficient for sailing at Brigham. The first “scow” known to be built at Brigham was “Rip” designed and built by Bill Turner and John Foreman in 1935.  Club records show Rip winning the Knock-Out Cup in 1936. Scows are now the predominant shape of hull. Another design of boat sailed at Brigham in the past was the “Sharpie”: a derivative of the Yawl, basically it was pointed at both ends and similar to the Norfolk Punt.

Two original “Sharpies” are still in existence today. “Vision” was winning races in 1933 and after being lost from the club returned restored to win another race in 1989. “Amaryllis” the other Sharpie was sailing at Brigham by 1933. She was built by Walter Silverwood, a founder member, probably in the late 1920’s. Walter always kept “Amaryllis” in immaculate condition. Walter died many years ago and after passing through several owners “Amaryllis” was fully restored in 2003/4 and is owned by a club member.

The Brigham Scow has evolved over the years to be the boat of choice on the waterway. The 16’ broad beamed flat bottomed hull is capable of carrying a large balanced lug sail of 180 – 200 square feet. The boats are highly manoeuvrable and fast, capable of sailing close to the wind and tacking in the narrow waterway.

No history of BSC would be complete without a mention of the BSC “Lighthouse” built in 1953. The idea to build a starters hut in the design of a lighthouse was inspired. What could have been an unattractive blot on the landscape became an attractive and amusing landmark. Sadly after nearly 50 years of withstanding the elements it gave up the fight and blew down during a strong wind in the spring of 2002.

To find out more about the Amaryllis, 75 year old Brigham Sharpie restored by David Hamilton, click on the picture below:

Thank you to David Hamilton for histories and photographs – Photos courtesy of David Hamilton held in trust by David & Brigham Sailing Club. Used with permission.

You can see from the video below, filmed in the 1970s on the River above Struncheon Lock, that some things never really change. Although the popularity of spending leisure time on the River Hull has waxed and waned over the years the beauty of the river and the pastime remains.