The Bridges of Hull – a Love Story

The bridges are part of the love affair and like most affairs “It’s complicated”.

There’s the two sides of the city, East Hull and West Hull. There’s the two Rugby league teams, the Airlie Birds and the Robins and finally there are the people of Hull.

The bridges are what binds the affair together and like most affairs can sometimes make you late for work!  Or keep you from getting home on time.

No other city in the world has so many opening bridges over such a short distance of navigable river.  The important definition is ‘navigable’.  All the bridges being road, rail or foot,  open to permit passage of vessels. Not just small pleasure craft, but commercial vessels with hundreds of tonnes of cargo.

The first cargo carrying vessels to use the Hull were probably Bronze Age, followed by the Romans and then the Vikings!  The only difference between then and now was there were less bridges. In fact there were no bridges, crossings of the river by people and livestock was by small river ferries.  The first bridge over the river Hull was built in 17th century. 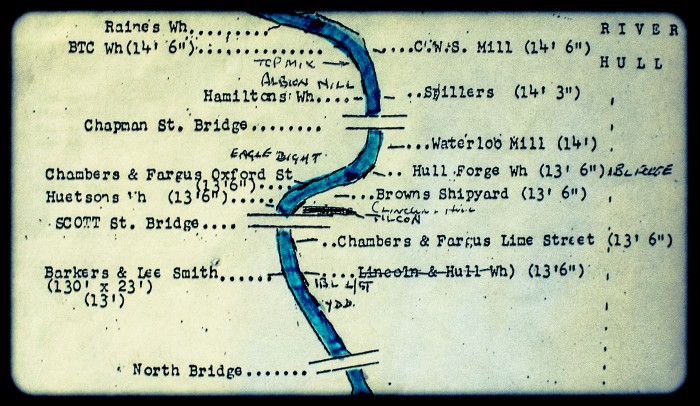 The affair continues with more bridges still being built across the Hull and yes they all have to open for vessel traffic.  In 1990, the Council tried to avoid building a bridge and chose to build a tunnel under the river. The tunnel flooded during construction,  so a bridge was built.  It’s a love affair with bridges.

Since the River Hull is tidal, the  bridges do not have a regular schedule of opening and closing.  The tides are governed by the phases of the Moon. Whether the bridges needed to open was dictated by the size of the ships using the river, the state of the tide and whether it was springs or neaps or inbetween.  “It’s very complicated”

The local radio stations traffic reports provided and still do provide a commentary on the activities of the bridges.  If you live in Hull, you cannot have missed hearing a detailed report of which bridge is opening and when.  With a bit of local ‘nowse’ you could work out which way the vessel was travelling and avoid the bridge or bridges that were going to open next and use the bridge that was just closing. That way you reduced your lateness to work, school, home or elsewhere!

The next few bridges get even more interesting.  Hull High swing bridge is railway only and is the sole link to all the Hull docks on Hedon Road.  Wilmington Low swing bridge was a railway bridge, but is now pedestrians and cycles only. The bridge is 110 years old with a stylish wooden control room perched high above the trackway.  Sculcoates Bridge is a road swing bridge which has ornate civic castings on it’s sides.

Scott Street bridge is now derelict and is permanently open to river traffic.  It is a twin lifting bridge powered hydraulically.  North Bridge is now a single rolling bascule bridge. Before the early 1900’s,  it was a drawbridge that lifted slightly before being rolled back along the approach road.  Drypool Bridge is single rolling bascule lifting bridge similar to North Bridge.

Scale Lane Bridge is without doubt the most entertaining way to cross the River Hull.  It is the most recently built bridge across the river and is for pedestrians only. When the bridge opens for occasional river traffic or more usually for weekend festivities, the pedestrians can remain on the bridge whilst it swings open like a gigantic pinball flipper, accompanied by music and lights.

Myton Bridge is the longest bridge across the river and is actually a ‘counterbalanced, unequal span, cable stayed, box girder, swing bridge’. This carries the main arterial A63 traffic between Hull Docks and the M62.

The final bridge before the River Hull meets the Humber, is known as Ha’penny Bridge or the Millennium Bridge, built near the site of the former South Bridge.  The bridge is a swing bridge for pedestrians and links The Deep to the new C4DI and the revitalised Humber Street Fruit Market venues.

These bridges form a unique part of the past, present and future culture of Hull and are best appreciated from the water if you can get the chance to make a passage on the River ‘Ull.

Open Bridges is an independent Hull based project in partnership with HCC Streetscene Services taking place during the City of Culture Freedom Season.