It was pouring down outside yesterday, but cosy inside the Spider T where we spent the day swapping stories over tea and cake for Open Bridges: A River Full Of Stories.  Thanks to Mal Nicholson, owner of the 62′ Super Sloop on Hull Marina for welcoming a great group of people to share stories on board.

Thanks to everyone who joined in the day –  former lightermen Trevor Branton, Keith Eastwood, and Victor Shirtliff with marvellous tales of working life on the barges which bring all the old photographs to life. Thanks to Tom Fry for memories of when he started working at Gilyott’s back in 1951; to Karen Walker and Linda Bragg, daughters of Terrence Hubbard who skippered the Spider T when they were children in the ’60s and have terrific tales of when it was their playground and to former trawler skipper Ken Knox with tales of the many trawlers which were built in Beverley and launched sideways to make their first journey down the River Hull, into the Humber Estuary and out to sea.  Thanks to Phil Warren with stories of his great grandfather and great uncle of Warren’s Shipyard who designed and built the Spider T, the pride of the Tomlinson fleet, launched in 1926; Glyn Holt whose father captained the Spider T and Geoff Shipman for tales of his Grandfather’s rise from orphaned son of a Humber Keel Skipper to (almost) becoming a millionaire. The full stories will be available soon as the whole session was recorded and filmed for the forthcoming River Full Of Stories book, film and exhibition.

Special thanks to the River Full Of Stories team, Phil Codd of Humber Film, writers and interviewers Russ Litten, Andy Richardson, to Mason Wild for great hospitality on board throughout the session, to Keith for loan of his fascinating history work, photos and cuttings and again to Mal Nicholson, current owner and Captain of the Spider T.  Click on an image in the gallery of photos from the day and scroll along to see the full picture…

Aga and kettle on 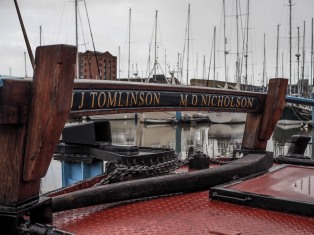 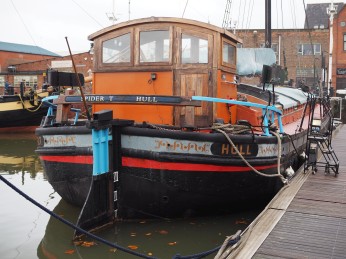 Keith’s clipping from the Mail, Gled and Lightermen

Click here to visit the Spider T website  where you can find out all about her history and current activities.

Thanks to Angus at the Mail for the use of the River archive photograph.

The idea for A River Full Of Stories came about when many of the 2000 visitors to the Open Bridges exhibition inside Scale Lane Bridge told us fascinating tales of their lives working on and around the river.  We’ve been collecting stories throughout July – September 2018 and are now preparing the River Full Of Stories film, exhibition and book. We’ll keep the website blog up to date with stories and memories as we go along.

A River Full Of Stories