Thank you to everybody who came to the live quadraphonic performance of the Open Bridges music – ‘Moments in Time’ – by the composer John Stead to accompany the Open Bridges film at Beverley Art Gallery on the Summer Solstice 2018.

We were delighted to welcome Her Majesty’s Lord Lieutenant for the East Riding of Yorkshire to the evening. The acoustics and atmosphere in the beautiful gallery were just right – and together with a glass of wine made for a lovely gathering.

The Open Bridges film was made by 16 film makers from Humber Film Creative Community, filmed at every bridge over the river, and from the bow of the historic barge MV Syntan during the Open Bridges journey on the autumn equinox. It was edited by Phillip Codd and is showing at the art gallery in Beverley Treasure House from May until July 3rd. Last night’s event was a chance to hear John Stead’s wonderful soundscape as a full quadraphonic live diffusion. John recorded and manipulated sounds found in nature and every day life including sounds of the bridges movements and the journey along the River Hull from its source as it bubbles up in the Yorkshire Wolds down to the urban industry of the city and out into the Humber Estuary.

Very pleased with these comments about the evening:

“Turns out it was a match made in heaven…”

“I attended the opening of the Turner Prize at the Ferens – bit this was a different class.”

“It was amazing last night thanks. I’ve not seen the film before and it was brilliant. The soundtrack was worked brilliantly and the kids really liked it. They do loads of music at school but they’d not heard anything like it and really enjoyed it and were interested in how it affected them. Thanks again for an amazing evening. “

“So bowled over by the presentation last night. I know it would have been different had I moved around the room but I was mesmerized by the film and did not want to miss one second. I hope you were delighted by the turn out and the reaction. You and Rich are movers and shakers who manage to get the seemingly impossible to happen…”

“It was great, eloquently hosted, a wonderful performance by John of his work and very calm (not at all like the stampeding cattle!).”

“…thoroughly enjoyable.  You made a great job of introducing it. The film and soundtrack are amazing and I’m so pleased it’s doing so well …it should do…its a unique piece of work and so well done…plus of course the project was so original and creative.  Flippin well done!”

“It was a truly spectacular experience!”

“Well done to you both. Great night last night. Was well received and sounded ace.”

“It was a very, very successful night, the film, sound & music, audience and gallery working well together. Splendid end to a busy day.”

Here’s Rich’s photograph of John in the gallery just before everyone arrived.

Getting ready to start – photo by Helena Gaudekova 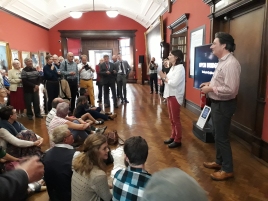 Thanks to  Museum Manager Nial Adams and his team – Rob Blaine and Jane Beilby – and to curator Helena Gaudekova for photos and phone video clip: