We’re half way through the Open Bridges exhibition Saturdays inside Hull’s Scale Lane Bridge, and it’s been another great day with a continual flow of visitors and some fascinating conversations. The panel depicting the transcript of the conversations from ship to shore, bridge operators and event control on the night as the city was split in two has generated a lot of interest and discussion. The activity on board HMS Pickle as the 13 flares were fired into the sky tell of the excitement on the night.

Click on the Open Bridges – Radio Transcript panel below to see full size image, or scroll down the page to read the text of the conversations as they happened on the night:

Thanks to Les Drake of Digital Creations for his recordings on the night on board HMS Pickle which we transcribed for the exhibition. 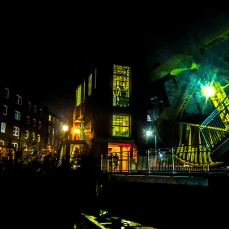 Drypool from the Comrade at Open Bridges by Phil Withers

Open Bridges Hull: For the first time in the city’s history all 13 of Hull’s bridges raised, swung or closed simultaneously splitting the city in two at 20:17 hours on the autumnal equinox 2017 during Hull City of Culture’s Freedom Season.

Open Bridges is an independent Hull based project, concept and management by Rich & Lou Duffy-Howard

Open Bridges objective was to split the city in two, denying the freedom of movement east and west across the city, by raising and closing all 13 bridges over the River Hull simultaneously for the first and only time in the city’s history, at 20:17 hours on the autumnal equinox 2017. The river runs north to south through the middle of the city. It’s the only city in the world with so many all movable bridges along its navigable stretch. It’s the only place where it could happen.

Also for the first time in the city’s history there would be 3 vessels representing 3 centuries on the River Hull: the 18th Century Schooner HMS Pickle, the 19th Century Humber Keel Comrade and the 20th Century Motor Barge Syntan. They were to be met on the Humber estuary by 21st Century tugs: Svitzers Bristol and Josephine and the 2017 SMS Towage Superman all supported by the rapid response rescue boats of Humber Rescue.

The transcript is taken from a recording made on board HMS Pickle and includes communications on maritime frequency VHF22 between vessels and the Hull and Humber Harbourmasters, event radio communication of 20 Bridge Operators plus Engineers, Pete Curry – Event Control, Harbourmaster Pete Bayley, and the conversations on board HMS Pickle, the voices of its Captain, Mal Nicholson, Her Majesty’s Lord Lieutenant for the East Riding of Yorkshire, the deputy Humber Harbourmaster Andrew Swift, Captain Malcolm Mathison and Harry, Ken and crew.

“It’s a lot isn’t it? I’d have preferred to have waited to be honest, it’s quite a lot of tide that”

“One of our launch consuls is just hanging off Ruscadors”

“This must be one of Yorkshire’s biggest, you know what I’m saying – I’ve never seen it come together like this

“It’s a privilege to be here.” “It’s a real feat of organisation isn’t it?”

“I think it’s steadying, we’re not drifting backwards hardly. We’ve got 40 – 45 minutes yet. Still a long way to go and a big tide

Would you wait a little longer?”

“Well she’s powerful enough. You’ve got to watch the current, I don’t want it to wash us into the dolphins that’s all.”

“Just watch the end of Ruscadors, if it starts to take you in you can end up in the horse wash if you don’t watch it

Yeah, I’ve got that t-shirt as well”

“We need a little tide to wash her round don’t we, we’re barely tickling along that’s all we need to do. I think the angles about right I’ve got a transit line and she’s maintaining it”

“Trouble is you’ve got a converging current there”

“I want you to watch out for distance on the end of the bowsprit! If I have to come around I don’t want to damage her. I’m going to go behind those red lights to the green and put her head in there”

“I don’t know. I can’t tell you until it starts happening and it’s going to happen rather quickly! It’s a very, very strong tide”

“Yeah, I’m going to start turning her very shortly, head for that green light, and just get into a position now to ease her round. Right, coming her about steady, just carry us in, stern’s coming about – can somebody shine a light on the rudder post please?”

“The tide should push her bow round a bit, she should give you a hand”

“Can you ask Humber Rescue if she can just give us a push on the starboard bow?”

Give her a kick ahead port bow, sterns coming in, I can take her over there now and square her up. Ok coming about, that’s better – if they can just push us through to keep us square

“Humber Rescue can you give us a push starboard?”

“You’ve done this before Mal!”

“Ok – received and understood. Getting ready to launch now

How many bloody arms do they think I’ve got? Harry, we’ll have to get away from that!” (The Deep)

“We need the Rescue on the port side, we should be able now to control her on the rudder and I think she is doing.

Harry get some flares this side, start rattling them off”

“I would have liked a bit more…”

Just holding her head to wind. The wind’s catching the bow that’s all. The wind’s picked up”

“Comrades coming down” (the river)

“It’s great when a plan comes together, isn’t it?”

“Yeah we got it nailed – well done lads! Absolutely well done, that was bloody perfect”