We were kindly invited on the Syntan as it travelled from Beverley down the River Hull, to Hull Marina for the Folk and Maritime Festival. The journey with Humber Film’s Alex Davies was to collect stills, film footage and bridge and vessel timings for Open Bridges. 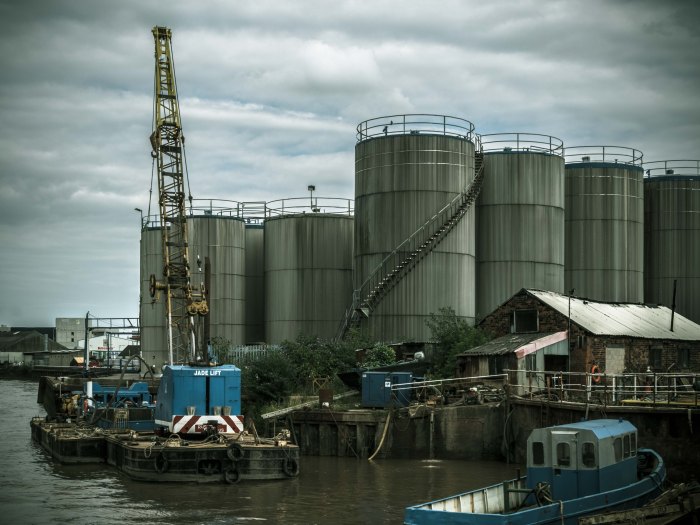 Usually photographs are taken looking at the subject because you know where the subject is, or where it’s going to be. On this occasion the possibilities were at 360 degrees. Even at 4 knots, or 7 feet per second, opportunities came and went at a fraction of a second. The experience was slow and intense.

All of the photographs taken with a fixed prime lens – Olympus Micro 4/3rds 25mm equivalent to a 52mm standard SLR, no zoom – from the deck of the M.V. Syntan 21.07.2017. Click on an image and scroll through: 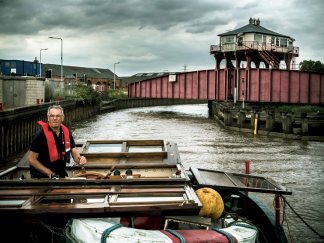 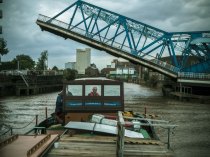 North of Ennerdale trees grow into the river and overhang and the willow can whip if your wits aren’t about you. The bed is silted and shallow and can jolt and unbalance unexpectedly, always one hand on the ship.

The wheelhouse and chimney came down to shoot Ennerdale and Sutton Road. A layer of varnish disappeared as Stoneferry came a little too close for comfort and the first to swing was Wilmington. Industry became both brand new and derelict. Steps led to places lost in dead memories. The final stage from North Bridge was swift and entering the open expanse of the Humber’s choppy tide from the mouth of the Hull I could see Paull and the Humber Tavern to the east and a fleeting past of uncle Syd at Ruscadors, my dad baling out a flooded Scale Lane factory in the seventies and all of the docks busy and looking up blinking to towering brand new ships, far above, in the sunshine.

Open Bridges – freedom or freedom withheld? Hull, UK is the only city in the world where this can happen.

Open Bridges: The river journey and the bridges

Open Bridges – Hull City of Culture 2017 to be split in two: The River Hull runs directly through the centre of the city defining East and West Hull and the culture of the city. On September 22nd Open Bridges will signify the vital role bridges play in everyday life with a new musique concrète commission, a river journey and the mustering of historic vessels. For the first time in Hull’s history the city will be momentarily split in two, denying the freedom of movement east or west across the River Hull.

As the river journey ends the music begins