‘Open Bridges: A River Full Of Stories’, gathering stories to preserve the heritage of the River Hull, its bridges and the people and vessels which have used it over the years. 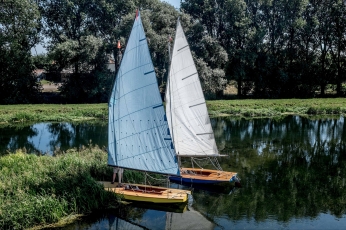 Blue sail is MAGIC built by Howard Goodrick in early 1970s and restored a few years ago. White sail is JARIC built in early 1980s. 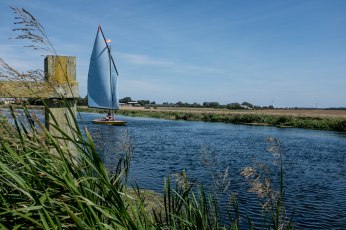 Brigham scow from Rotsea on the Hull photos by Rich

Another blisteringly hot Sunday walk to explore the River Hull took us to a beautiful stretch of the River, near Rotsea to Emmotland on the west bank of the River Hull. The water was high and cool despite the hot summer sun. Butterflies, dragonflies and grasshoppers joined us as we passed boats moored at Bethell’s Bridge. The air adjacent to Tophill Low nature reserve was still as can be, but as we neared the bridge at Emmotland two sleek Brigham Scows raced past, the breeze and blue skies refreshing as they returned to and fro along the stretch.

Brigham Scows, thanks to David Hamilton for the information about them…

“Two of the last remaining Brigham Scows, there are only about six or seven left.
Blue sail is MAGIC built by Howard Goodrick in early 1970s and restored a few years ago. White sail is JARIC built in early 1980s.
Both seen out regularly during summer months.
The first Brigham Scow was RIP built in 1935. The design evolved further in the 1950s and 1960s. Latterly there were several built around 1970s to a similar design based on DOLPHIN designed by Billy Turner, a founder club member.
JARIC is rather different and based on a much earlier American “Lark” Scow which originated in the late 19th century.” David Hamilton

Do you have memories about life on and around the River Hull over the years? If you would like to talk to us about sharing your memories contact us during July August and September 2018. Click here to get in touch

Open Bridges made history when for the first time all 13 of the bridges over the River Hull in the UK’s City of Culture 2017 raised, swung or closed simultaneously splitting the city of Hull in two at 20:17 hours on 22nd September 2017.  Historic vessels sailed down the river, met by 21st century tugs, to the sound of a new musique concrète work by composer John Stead.